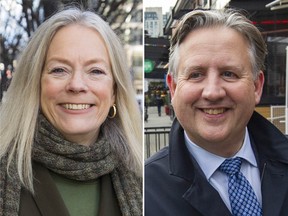 Vancouver Coun. Colleen Hardwick withdrew her motion on Tuesday night to have an Olympic question added to this year’s election ballot after suspecting no other councillors would support it.

Hardwick said she submitted a notice of motion to city staff on March 1, asking that a question be added to this November’s municipal election ballot asking whether voters support hosting the 2030 Winter Olympics.

The issue has been a hot topic since the City of Vancouver announced last December that it had signed a memorandum of understanding with four local First Nations and the City of Whistler to explore the feasibility of hosting the 2030 Games.

Hardwick said she had lined up another councillor to second her motion at Tuesday’s council meeting.

However, she said that Mayor Kennedy Stewart (her opponent in the coming election) had stated publicly that her question would violate the terms of the MOU and, as a result, all the other councillors had “run for the hills.”

As a result, she wasn’t confident she could get anyone to back her motion, which would have meant it would “die on the floor.”

“The wise thing was to pull it now and spend the next two weeks talking to Vancouverites,” Hardwick said. “People should have a say in the lead-up to the 2030 Olympics.”

She said she would represent the motion in two weeks.

In 2003, seven years before the 2010 Winter Olympic and Paralympics Games in Vancouver and Whistler, a non-binding vote was held in Vancouver to gauge support for the Games.

According to Hardwick’s withdrawn motion, there was a 50 per cent voter turnout with 64 per cent of voters in favour. This vote was used by the Vancouver/Whistler bid committee to support its application with the IOC.

Hardwick’s motion stated that Winter Olympics viewership was falling and that the public shoulders most of the costs of putting on the Games. She wrote that the full details of the 2020 Olympics’ costs wouldn’t be released until 2025.

Read the full article on The Vancouver Sun here.